What problem are we solving?

Most basic electrolyzers orient the plates vertically in the tank, allowing buoyancy and gas bubble collisions to dislodge gas bubbles from the anode and cathode plate faces.

The gas bubbles can also end up deactivating an adjacent plate surface if the plates are too close together. If the plates are too close, the gas bubbles may grow to a size that allows them to come in contact with the face of plates across the plate gap, deactivating plate surface on two plate faces until buoyancy causes detachment. This potential for dual plate deactivation reduces the number of plates that can be put into an electrolyzer tank as the plate proximity is limited by the size of the gas bubbles produced. This limit in plate proximity reduces the overall gas production capability of any electrolyzer design. 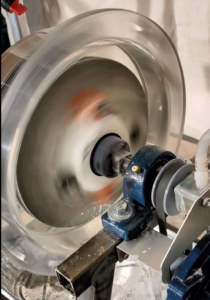 The smaller bubbles and faster detachment times allow more of the plate surface to be used in the same period of time. Smaller bubbles can also use more plate surface as they can cover more area due to decreased spacing, helping to achieve higher plate surface usage while simultaneously freeing up plate surface at a far higher rate. This achieves a dual efficiency as more water molecules are exposed to the anode and cathode surfaces faster.

Additionally, the smaller bubbles allow the plates to be placed closer together in the tank. Since larger bubbles no longer form, the gap between plates can be reduced, as the likelihood of dual deactivation of plate surface due to large bubbles spanning the plate gap is reduced. With the plate gap reduced, the number of plates within the same electrolyzer footprint (3-dimensional area) can be increased. Increasing the number of plates increases the amount of gas that can be produced within the same footprint.

If you would like to learn more or cooperate with Cambridge R&D on future research in this area, please feel free to contact us.